Top 7 Items Purchased From Costco in the US

Items Purchased From Costco: If you need to stock up on commodities such as food, household goods, appliances, apparel, and so much more, Costco is the place to go. According to a recent top website survey, 46% of Americans conduct the majority (pun intended) of their shopping at wholesalers, owing to the obvious savings, good quality, and variety of things on available. While customers may purchase a wide range of products at Costco, what truly sells the most may surprise you. Here are the Top 7 Items Purchased From Costco in the US:

Top 7 Items Purchased From Costco in the US 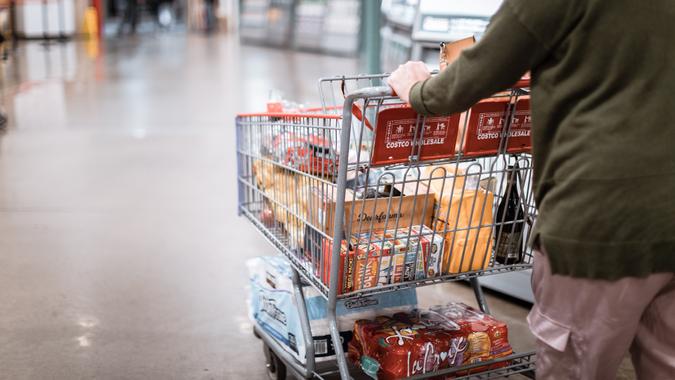 We all know how important toilet paper is, and it was brought home even more strongly during the epidemic when businesses couldn’t keep it on the shelf. However, it appears that buying TP in quantity is so prevalent that it saves Costco a large amount of money. According to Reader’s Digest, the corporation sells over a billion rolls of toilet paper per year and earns well over $400 million from that alone.

According to Thehotdog.org, another of the best-selling Costco items isn’t even something most people buy in bulk-it comes from their food court: 100% beef hot dogs. That’s most likely because the time and effort required to complete a thorough shop at a wholesale retailer leaves everyone hungry. Every year, Costco sells over 151 million items, totaling $226 million. As we previously reported, these hot dogs are so popular that the firm has pledged to not increase the price of the hot dog and soda combo above $1.50 for the foreseeable future.

Bacon would certainly be a top choice for meat lovers if you could bottle a culinary flavor and wear it as perfume. Bacon has always sold well, but Costco appears to have its finger on the pulse of bacon enthusiasts, as they sell a lot of their Kirkland brand hickory smoked bacon, according to Fox Business. According to Insider, something about the epidemic increased bacon sales—perhaps all the time spent inside made people seek comfort food. While there is no data on how much they sell, and inflation may have begun to impact sales, it looks to remain a Costco fan favorite.

While most of the food products purchased at Costco will require preparation, one item that keeps people returning is their precooked rotisserie chicken. Costco sold 87 million of the delectable chickens in the 2017 fiscal year, according to the Wall Street Journal. According to NPR, this item is so popular that Costco had to construct a special supply chain in Nebraska just to keep them coming in hot and fresh.

Furthermore, the company has kept this popular product available at the same cheap price of $4.99 for approximately three pounds of chicken.

According to Fox Business, despite earning roughly $40 million per year, they are actually losing money. Customer pleasure is sometimes worth a loss.

The first thing that comes to mind when you think of Costco is definitely not gasoline, but after reading how inexpensive it is, it could be.

According to MechanicBase.com, Costco’s gasoline fuel sales account for around 10% of total revenues, amounting to about $20 billion per year. In a month, its member gas stations can sell millions of gallons of gas. While there may not be a Costco gas station at every Costco warehouse, there are usually many of them nearby, however the queues may be longer than at a conventional gas station. Costco members also receive an additional gas discount that non-members do not. According to Barron’s, Costco members can save up to $1 per gallon by purchasing Costco gasoline, but on average, it’s around 30 cents cheaper than the closest competitors, according to Fox Business.

While there is no hard statistics on how many large appliances Costco sells, Katie Roberts, a consumer analyst with DealNews.com, says they are a popular purchase at Costco for a number of reasons: “They are heavily discounted over the holiday season and come with an extended warranty.” Costco typically offers various appliances for up to $800 or even $1,000 off during major sales holidays such as Memorial Day and the Fourth of July. Furthermore, Costco members receive a significant benefit in the form of an extended warranty, which applies to large appliances such as refrigerators, dishwashers, and washers and dryers. Essentially, Costco will extend the manufacturer’s warranty for up to two years from the date the appliance is purchased.”

Gift cards, according to Roberts, are also popular at Costco. “Costco gift cards are terrific deals because you can get them for less than the full amount on the card.” For example, we’ve seen Costco sell $50 Jiffy Lube gift cards for $30 – a 40% discount! The gift cards are frequently discounted by 10% to 25%. One remarkable gift card offer now available is a $500 Southwest Airlines eGift card for $450. That’s a 10% discount, and the money could come in handy considering the high cost of flying.”

10 US cities with the fastest growth for small businesses